There is no better way to start a day than by inventing a word.

Basically, what I did was merge two words and made a new, similar sounding word.  Pretty cool, huh.

The words are “Friends” and “Philanthropy” and they have been forever merged because 2011 is the year I officially become a Frilanthropist.

A frilanthropist is someone who, instead of giving $5, $10, $25 to the great causes around the world or his/her various alma maters, financially supports his/her friend’s various ventures.

My path towards being a frilanthropist has been a long one.  I’ve always had very talented friends and the way in which they have needed support has changed over the years.  For a long time, it was merely showing up to events and helping to create buzz in whatever way possible.  In the age of social networking, the most common way of supporting people is by posting things of Facebook, re-tweeting things on Twitter, or maybe even writing about things in one’s blog (ahhh that’s about to happen right now…. INCEPTION…)

While these are all good things and should continue, money often makes things happen and many of my friends are in positions where obtaining a certain amount of money will open up a door that a Facebook post cannot.

Until very recently, I used my close connections with my friends to hopefully get free stuff that others would have to pay for.  T-shirts, CDs, merchandise, tickets, etc. were often freebies for me in exchange for spreading the word. Guilt over this has built up over the years and I’m finally at a point where I realize how important it is to throw some money at those who are really trying to make it in their various mediums.

My life-long friends that comprise SMKA are in the middle of a fundraising campaign through Kickstarter to aid in their project w/ Young Scolla.  My initial reaction was, “Really Mike, 4000 dollars? I don’t know how that’s going to happen, but I really hope that it does.”  Then a few days went by and I thought about how messed up that was.  These are my boys, they’re putting themselves out there in the always uncomfortable position of asking for money, and most importantly, these are my boys.

I mean, has anyone else let me have a cameo in one music video and then given me a “Best Supporting Actor” nod in a second one? Not. Even. Close. (I can’t believe it took me 42 days to post this picture).

Every time they are nearing a big milestone I’ll get a text/tweet from Mr. Walbert saying: “$9 away man, you know what to do” and I do it immediately,  because I care. I am proudly one of those 85 backers and I’ll do whatever I can to help them get to $4000 (they are already 70% of the way there). 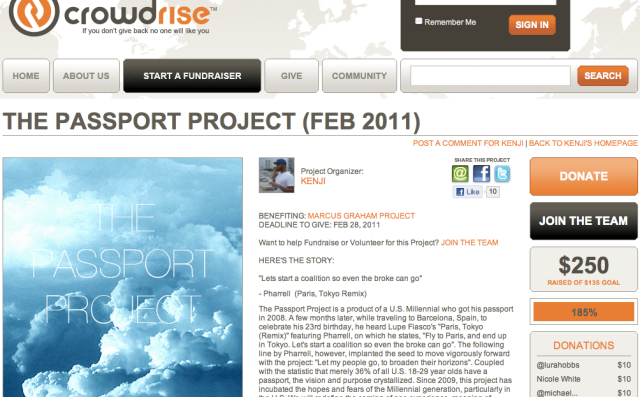 Unlike SMKA, whom I’ve known since 5th grade, Kenji Summers is someone I’ve only known since my NYC tenure began.  With that said, I instantly knew I’d like the guy because of his dedication to the snapback and his love for Lil B.  Through the various social networking outlets, I’ve been watching him promote this project he has launched called The Passport Project.

It’s a pretty simple premise; raising awareness about the low number of young adults that have passports (36% of all 18-29 year olds) and raising money to get passports for those lacking them.

Travelling (albeit domestic) has been a major part of my development as an adult and I fully respect the fact that he returned from an amazing journey and his first instinct was to help give people the opportunity to experience what he experienced and feel what he felt.  As soon as I’m done posting this I’m going to drop $10 bucks in the pot because it’s 2011 and I’m a bonafide frilanthropist.  You should be too.

If the excitement of helping your friends doesn’t appeal to you, consider this story.

After a much overdue breakfast and chat session w/ my friend Mr. Solomon, he asked me about my site and how I felt it was going.  I told him how blown away I’ve been about the response and the total viewership, but I also told him the way I operate it now will most likely be the way I operate it when it’s finished in 458 days. I don’t ask people to re-post things, send it to their friends, spread the word, etc, not because people shouldn’t do that, but because this just isn’t my time yet to ask for favors.

With that said, there will be a time, maybe in 2 years, maybe in 5, maybe in 15… where I call on EVERYONE for help.  For what, who knows, but it most certainly will happen.  And when that happens, I will feel less guilty and less of a hypocrite, solely because of my background in frilanthropy.

I hope this little spiel starts you on your journey towards frilanthropy (that is, unless you’re already there). Do consider supporting SMKA, Kenji, and anyone else you know and respect that is producing work for your enjoyment and for the betterment of society.

p.s. Please don’t read this and think you can hit me up for money every time the sun sets. The fun fact is, if you do that I will do the opposite of donate to your cause.  I will rob you.

NYC via ATL //// rembert.browne@gmail.com 500daysasunder.wordpress.com
View all posts by Rembert Browne →
This entry was posted in My Team and tagged Philanthropy, SMKA. Bookmark the permalink.