Top 11 Contributions to the Internet

One of the many luxuries that WordPress has over Tumblr and other blogging sites is the ability to see a variety of statistics about your site.  My favorite by far is the “Search Engine Terms” category, which essentially tells you what people were searching that led them to your blog.

It has quietly become the most humorous thing in my life, because the purposeful-randomness of this blog allows for some wild searches to lead someone to this site.  Examples:

“I’m a Ballerina and I am Strong”
“High Class Dashiki Shirts”
“Stephon Marbury with a Doo Rag”
“Black Boys Hanging out with the Wrong Friend”
“Na’vi Kanye”
“Races: Negroes, Chinese, Eskimo”
“Why Fat Joe is Allowed to Use the N Word”
and last, but definitely not least

Some of those I completely understand how they eventually got here, but a few (see: the last one) I have no earthly idea.

Outside of the more ridiculous searches, there are some that I have repeatedly noticed that make me quite pleased with the direction of this lil’ ol’ blog.  Finding truly unique stuff to write about on the over-saturated Internet is like thinking of something original for the NBA Dunk Contest.

My ultimate goal with this site is to figuratively be Blake Griffin, figuratively roll a car out on the court, figuratively bring out the Georgia Baptist Mass Choir, and figuratively jump over said car w/ a two-handed tomahawk jam. The only difference is in real life, I’m no punk, so I’m not jumping over the figurative hood.

I’m jumping over the sunroof, and kicking Baron Davis in the head if I don’t like my pass.

Now that my roid-rage is in full bloom, lets get to the list of my 11 most important contributions to the Internet.

Yes, that’s the heavenly face of Lil B.  It took me a while to find this image (6 pages down), but I’m just thrilled to know that someone had the urge to click on an extremely close-up, blurry picture of Lil B.  Also, there’s a huge difference between searching “swag” and “swag swag” (obviously), and as someone that appreciates the difference, I’m just honored to have made it this high up.

I mentioned once that homophobia in the Black community would not be as strong if Luther Vandross had come out. I said that in the most loving way for Luther, so a search like “Luther Vandross Gay Lonely” makes me sad. I wonder what kind of image that person was looking for when they searched that.  Luther sitting, alone, at a bar, mixing his drink, hoping someone comes over a talks to him?  Or maybe it was a picture of him at an award show in a white jacket with black frills wishing he didn’t have to sing so many songs with Cheryl Lynn? I guess we’ll never really know.

This picture stems from a jealous rant I had about Nick Cannon having tender moments with Zoe Saldana. Trust me, not once did I ever mention anything about an organization as illustrious as the illuminati possibly asking Nick Cannon to join their ranks.  That’s insane. They won’t even let Nick Cannon on LinkedIn. With that said, I’m very happy to know that people are googling “Nick Cannon Illuminati” and are greeted with a picture of Mr. and Mrs. Cannon holding a Teen Choice Awards surf board.  I hope it does more to decrease his chances of entry.

Yes, I am very pleased that my ramble about this being my least favorite piece of clothing has made it close to the top of the “Jason Williams Grizzlies Jersey Google Image” leaderboard. The real reason that this is on the list, however, is not because of it’s placement, but because someone emailed me yesterday, asking me if they could buy it from me, ASAP.

That’s a win in my book.  Huge win.  Thank you Google Images.

A lot of people have been curious about the career of the little white girl from the Missy Elliott videos, myself included.  When I included her as a comparison to a young Hayden Panetierre, I found out that she was the girl in the best movie of all time, Step Up 3-D.  Unreal.  Anyway, if you type “little white girl” into Google, it pretty much knows where the rest of your head’s at:

6. Search Engine Term: How to Drive Homosexuality Out Of The Black Community, 11th Post

Now we’re starting to move away from the world of just images and into full posts as well, which makes me a happier camper.  The funny thing about this is that whomever searched this was not looking my type of article in the slightest. They were eagerly looking for ways to kick the gays out the Black community, while my article was about decreasing homophobia. In my naive, optimist-filled brain, I’d like to believe that he/she read my article in its entirety and suddenly became a champion for equal rights. While that sounds beautiful, I’m sure he looked at it for 2 seconds, called it trash, closed his laptop, and continued in taking picture of himself with his camera phone…

This is a very good thing.  The world needs to know about the existence of purple kool-aid shoes and I’m just trying to do my part.  I’m shocked more people haven’t talked for pages and pages about these shoes, but I guess that’s what separates me from people that spend their time talking about whatever other things happen in this crazy world of ours.  Also, note how clean the other kool-aid shoes are, then look at the grimy still-life grape kool-aid shoe photo shoot in the bottom right corner. I’m so proud. This must be what it felt like for my mom when my rinky-dink model car won the Boy Scouts Pine Car Derby against all the kids who’s dads were engineers and built their son’s cars for them. Yeah, I get the feeling now. 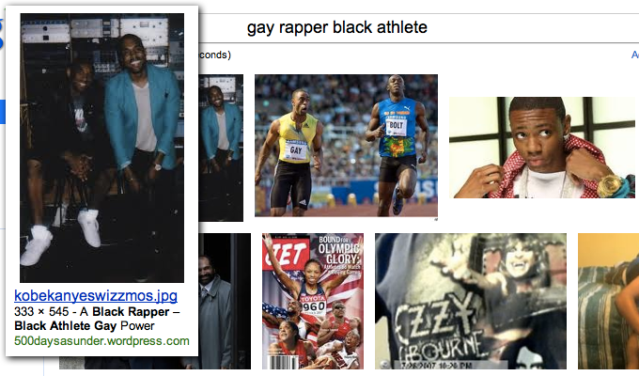 Yes, the gay rapper-black athlete power couple in question is Kobeye West.  Apparently, based on the number of times this search has led to my blog, a good deal of people are curious about black gay power couples, especially from the rap and sports worlds.  Who woulda thunk? Anyway, I’m extremely pleased with the top dog position on Google Images, as well as the 3rd position (that Soulja Boy picture — Soulja Boy + Stephon Marbury = Soulbury… duh).

Bring it On, the image of singing in the locker room, and Avon Barksdale from The Wire are all courtesy of the Remember The Titans post.  Being completely honest, I can’t believe no one had written this before.  This will probably end up being my strongest contribution to society, or at least to 18-24 year olds with Netflix and a low-key Saturday night on their hands.

When you simply google “500 Days Asunder”, it takes you to a few of the top posts, but when you google image it, the fun begins.  In case you’re struggling to make out these images, that’s:

And that’s just page one.

It’s flattering to know people are purposefully going to the site every day, instead of merely stumbling upon it by typing in “Train Man Nigga” and hoping for the best.  It’s exciting and I’ll try to keep up the decently-good work.

NYC via ATL //// rembert.browne@gmail.com 500daysasunder.wordpress.com
View all posts by Rembert Browne →
This entry was posted in Lists. Bookmark the permalink.

1 Response to Top 11 Contributions to the Internet