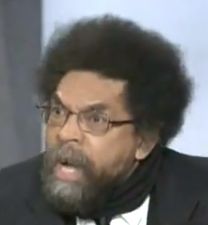 When the Jalen Rose vs. Grant Hill tiff escalated a few weeks ago, I wrote on how positive I thought it was that these dialogues were taking place and how I hoped other tiffs would erupt between prominent Black figures in the weeks and months to come.

ROUND 2: Cornel West vs. Al Sharpton

This took place last Sunday on MSNBC on a forum titled “The Black Agenda”. The moderator was Ed Shultz and the guests were Al Sharpton, Velma Hart, Robert Traynham, and Brother Cornel West.

An orderly back and forth between the four guests took place for the first 8 minutes about health care and Obama and needy communities.  Right before the commercial break, Al and Cornel start getting into it about the role of Congress, with a specific lean towards Black members of congress.

The commercial break occurs, and then it calmly starts back. Everyone’s getting comments in, but it’s apparent that emotions are about to run wild. Prof./Rev./Bro./Mr./MC West is attempting to cut off everyone and the only way to get a statement out is to talk loud and hope someone else hushes up.

The four person yelling match takes place a for a a brief amount of time, and then minute 11 comes around and (spoiler alert) it becomes the Sharpton vs. West show. I mean that not in the sense that they were making the best points, but in the sense that for the remaining 3+ minutes of coverage, they were the only two that spoke. Did others try to speak? Yes. Did others even come close to standing a chance vs. these two men? Absolutely not.

With all due respect to the other panelists, this is most interesting part of this forum. The broad and personal attacks between West and Sharpton highlight a number of very important issues.

Sharpton to West: “While a lot of people sit there inside their ivory towers, talking…”

Sharpton about Congress: “They were representing those same communities when they backed George Bush on the Iraq War… they were scared then, and their were scared now, if you’re scared say you’re scared, don’t blame that on Obama, say you scared to stand up for the people.”

West to Sharpton: “Brother Al, do you have a critique of Obama or are you fearful of critiquing Obama”

Sharpton to West: “That’s what i’m asking you, your friends in Congress that sit around waiting for President Obama to write a bill to go in Congress, that’s their job”

Sharpton to West: “Y’all are making excuses for people who have sat there for 40 years and done nothing… and now many of them want to jump all on this president”

West to Sharpton: “If investment bankers were stopped and frisked, he’d [Obama] say something”

There are so many important things going on in these quotations, it’s silly. For one, notice the use of the pronouns. Somehow, within all of the arguing, Al and Cornel began lumping each other into larger groups. When Al says “Y’all”, he’s referring to Cornel specifically, Congress and other “Ivy League” academics and pundits. When West says “You”, he’s referring to Al and others in the public sphere that seemingly do everything Obama says to do.

This argument takes place on the city, county, state, and federal level and while the issue becomes a harder one to tackle as the lens widens, the idea of that Black leader “owing” something to his Black population is there regardless of the jurisdiction.

While the two men are fans of the spotlight and know how to act once the camera’s on, I’m glad for once they pushed each other beyond their often-scripted (and often-rhyming) answers. Sometimes it takes personal digs and slight undermining to really get people to say how they feel. It’s apparent these two men like each other and respect each other, but their divergent careers with regards to race and policy and social issues cause them to disagree on many fundamental levels. Even amongst characters such as Sharpton and West, it’s important to witness the diversity amongst “leaders” of Black America.

I think it’s a great thing that both men have gone back and forth about their feelings on Obama. It’s impossible to know how much of Sharpton’s new-found love of Obama is related to the President’s visit to Sharpton’s National Action Network conference last week. With that said, his defense of the president seemed genuine, as did Cornel’s disdain.

In my opinion, I think they’re both kind-of right but I, still, am in Camp Obama. While my biggest criticism of the president has been his initial, apparent concern for 2-term presidency instead of making big stances in his first term, I think his strategy will pay off 10-fold in 2012-2016.

I’m interested to see where his “elders” stand as the election gets closer and, ultimately, once he gets elected for a second term (I’m not knocking on wood, let’s be honest).

Take everything I’ve said with a grain of salt. Watch the video and see who you agree/disagree with more. I think it’s one of the more compelling things either men has been a part of in recent memory.

A special thank you to Dominick Brady for posting this video on his blog this morning.

NYC via ATL //// rembert.browne@gmail.com 500daysasunder.wordpress.com
View all posts by Rembert Browne →
This entry was posted in Important Ones. Bookmark the permalink.