How’d You Find Out About Osama’s Death? POLL RESULTS. 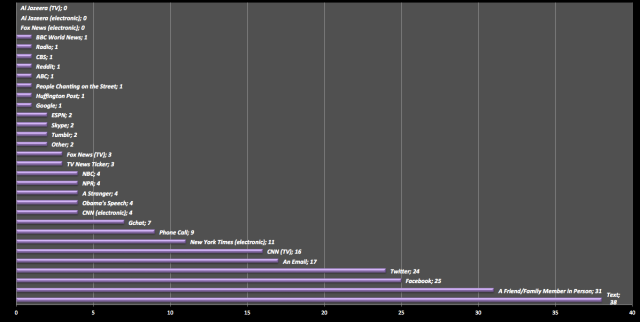 So here are the results.

Thank you to the 182 people that took the survey. You have done your weekly duty of contributing to science.

Some things worth noting from the results:

-I genuinely did not expect “texting” to come in first place. I knew it would be high, but I thought it would for sure be one of our social media platforms, either Facebook or Twitter. I’m happy about this. (Side note: I messed up by leaving off Sexting. Huge error on my part).

-I was so focused on seeing which avenue people got their news from, I initially forgot to include the category “friend/family member in person”. I forgot people still interact that way. Was very pleased to to know that, in 2011, humans still interact with one another in person about matters of importance.

-4 people found out on NBC, which is funny because there’s a good chance they were watching Donald Trump’s “Celebrity Apprentice”, and were rudely interrupted by real issues. Rough week, The Donald. Obama’s serving you left and right.

-9 people cited “Phone Call”, which surprised me because that’s like the 95th most likely way I would have alerted someone. I would update my Xanga page before I called someone about, pretty much anything. But that’s just me, apparently people still use their phones as phones.

-From the mouth of Ben Gordon: “I was the one that responded radio. I was listening to the Phillies-Mets game when one of the broadcasters casually slipped that Osama had died into the broadcast of the game. This is a near transcript of what he said: “Bottom of the ninth, one out, scored tied 1-1, Martinez on first, Mayberry up. Thheeeeee pitch. Strike one. We’ve recently received word that has Osama Bin Laden has been declared dead. We’ll get you more on that soon. Mayberry fouls it off. 0-2 count…” And they didn’t mention it for the rest of the game. Unreal.

-The 2 “other” votes were for responses “I watched it all go down” and “I killed him my damn self”. I apologize for not having the category “I Was There.” Sincerest apologies.

-4 people were alerted by strangers. One of those people said the actor John Corbett stood up in his restaurant and told everyone. I demand to know who this person is. Show yourself.

-Hands down the best comment was: “iPad notification interrupted my game of Angry Birds.” That’s got to be one of the weirdest ways to find out about the death of Osama Bin Laden. I applaud you, whoever you are.

-Finally, as a lover of TV, it’s good to know that it hasn’t been completely phased out by the internet. Conversely, as a former supporter/current hater of the NY Times Online, I wish people would find other ways to get their news. Don’t support those rude fools.

I’m extremely pleased about how this came out. It’s very cool to figure out all the different ways people obtain news.

NYC via ATL //// rembert.browne@gmail.com 500daysasunder.wordpress.com
View all posts by Rembert Browne →
This entry was posted in "Scholarly Research", Important Ones, Rando. Bookmark the permalink.

1 Response to How’d You Find Out About Osama’s Death? POLL RESULTS.